[Back to the Chapter Browser]

For the first attempt to deal with this area of semantic space, see Matisoff 1985 (’Out on a limb’).

The presentation of the roots follows a certain roughly logical order. First come the etyma that seem basically to have meant HAND. The most widespread of these, which we might call «the *lak-family», comes in some nine variant forms (allofams), with semantic spillover into the areas of CUBIT and FOOT (Etyma #’s 1a-1i). This HAND section also comprises 6 more etyma, of varying degrees of solidity (#’s 2-7).

Next come the roots whose basic meaning is deemed to have been ARM (#’s 8-15), followed by the more numerous etyma in the WING area (#’s 17-32), one of which (#17) has 5 variants. This study is rounded out by several roots meaning PALM or WRIST (#’s 33-37); then three roots referring to measurements made with the upper limb (CUBIT, HANDSPAN; #’s 38-40); finally an etymon with both nominal (ARMPIT) and verbal (TICKLE) dimensions (#41), and a group of 7 Proto-Kuki-Chin reconstructions referring to actions performed with the hands (#’s 42-48).

Most of the reconstructions offered are at the Proto-Tibeto-Burman level. When available, meso-reconstructions are also included (e.g. pKaren, pKiranti, pKuki-Chin, pLolo-Burmese, pTani). Usually these are subsumed under the PTB etymon they represent, and do not receive a separate number (#’s 1c, 2, 8, 19, 20b, 22), but occasionally they have so far only been reconstructed for a single subgroup, and so receive separate numbers (#’s 15, 26, 30, 42-48).

For 13 of these etyma, Chinese comparanda are suggested, so that they may plausibly be reconstructed back to the Proto-Sino-Tibetan level.

For the sake of completeness we include an Indo-Aryan root (#32) which has been borrowed into several Himalayan languages.

Detailed as these etymologies are, they by no means exhaust the semantic field of the UPPER LIMB, which includes such notions as FINGER, FIST, ELBOW, NAIL, etc. 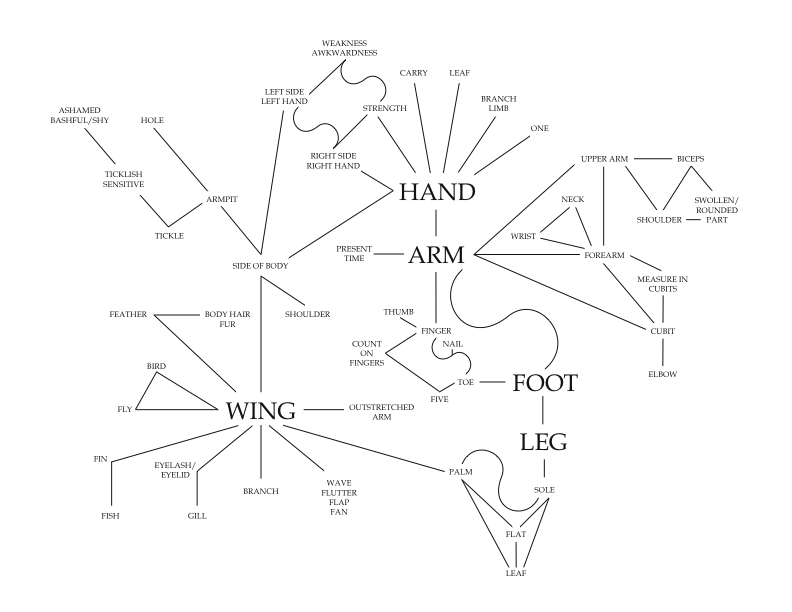